Problem Description
The northern part of the Pyramid contains a very large and complicated labyrinth. The labyrinth is divided into square blocks, each of them either filled by rock, or free. There is also a little hook on the floor in the center of every free block. The ACM have found that two of the hooks must be connected by a rope that runs through the hooks in every block on the path between the connected ones. When the rope is fastened, a secret door opens. The problem is that we do not know which hooks to connect. That means also that the neccessary length of the rope is unknown. Your task is to determine the maximum length of the rope we could need for a given labyrinth.
Input
The input consists of T test cases. The number of them (T) is given on the first line of the input file. Each test case begins with a line containing two integers C and R (3 <= C,R <= 1000) indicating the number of columns and rows. Then exactly R lines follow, each containing C characters. These characters specify the labyrinth. Each of them is either a hash mark (#) or a period (.). Hash marks represent rocks, periods are free blocks. It is possible to walk between neighbouring blocks only, where neighbouring blocks are blocks sharing a common side. We cannot walk diagonally and we cannot step out of the labyrinth.
The labyrinth is designed in such a way that there is exactly one path between any two free blocks. Consequently, if we find the proper hooks to connect, it is easy to find the right path connecting them.
Output
Your program must print exactly one line of output for each test case. The line must contain the sentence “Maximum rope length is X.” where Xis the length of the longest path between any two free blocks, measured in blocks.

Problem Description
After hearing about the epidemic of obesity in the USA, Farmer John wants his cows to get more exercise, so he has committed to create a bovine marathon for his cows to run. The marathon route will include a pair of farms and a path comprised of a sequence of roads between them. Since FJ wants the cows to get as much exercise as possible he wants to find the two farms on his map that are the farthest apart from each other (distance being measured in terms of total length of road on the path between the two farms). Help him determine the distances between this farthest pair of farms.
有n个农田和m条路，以及每条路的方向（方向在这道题中没有用），求最长的一条路，也就是两点间的最大距离，即树的直径.
Input

Roads in the North

Problem Description
Building and maintaining roads among communities in the far North is an expensive business. With this in mind, the roads are build such that there is only one route from a village to a village that does not pass through some other village twice.
Given is an area in the far North comprising a number of villages and roads among them such that any village can be reached by road from any other village. Your job is to find the road distance between the two most remote villages in the area.

Problem Description
A school bought the first computer some time ago(so this computer’s id is 1). During the recent years the school bought N-1 new computers. Each new computer was connected to one of settled earlier. Managers of school are anxious about slow functioning of the net and want to know the maximum distance Si for which i-th computer needs to send signal (i.e. length of cable to the most distant computer). You need to provide this information. 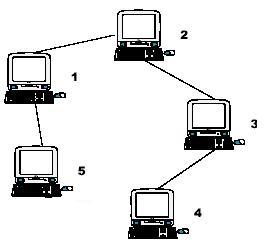 Farthest Nodes in a Tree

Problem Description
Given a tree (a connected graph with no cycles), you have to find the farthest nodes in the tree. The edges of the tree are weighted and undirected. That means you have to find two nodes in the tree whose distance is maximum amongst all nodes.
Input
Input starts with an integer T (≤ 10), denoting the number of test cases.
Each case starts with an integer n (2 ≤ n ≤ 30000) denoting the total number of nodes in the tree. The nodes are numbered from 0 to n-1. Each of the next n-1 lines will contain three integers u v w (0 ≤ u, v < n, u ≠ v, 1 ≤ w ≤ 10000) denoting that node u and v are connected by an edge whose weight is w. You can assume that the input will form a valid tree.
Output
For each case, print the case number and the maximum distance.